Just in case you might be wondering if anyone is afraid yet I have a few tidbits of data for you here.

The AAII bullish reading released on Thursday was 17.9% – before the shellacking on Friday. This is the lowest reading for many, many years. In essence, over 82% of those answering the survey no longer feel good about the market.

How Does That Measure Up in The Big Picture?

Against the historical averages:

It is important to note these are not one week events. Meaning?

Bullish sentiment has now been below 30% for seven consecutive weeks and is below its historical average of 39.0% for 43 out of the past 45 weeks.

Bearish sentiment was has been above its historical average of 30.0% during four out of the last five weeks….and 39 of the last 43 weeks.

But This is The Biggest Number of All

The lowest reading on bullish sentiment reached during the tech bubble bursting was registered in mid-February of 2003 at 21.1% (that is higher than right now – and after 2 years of selling.)

The lowest reading on bullish sentiment reached during the Great Recession collapse was registered in early March of 2009 at 18.92% (that is also higher than right now – and after months of treacherous, never seen in our lifetime events)

One needs to really let that sink in. Those historical periods represented collapse unlike anything we are witnessing right now.

Remember what Warren has stated for many decades:

“In the short-term, the market is a voting machine. In the long-term it is a weighing machine.”

This is backed up by a recent interview with Howard Marks where he added:

“The bottom line is that investor psychology rarely gives equal weight to both favorable and unfavorable developments. Likewise, investors’ interpretation of events is usually biased by their emotional reaction to whatever is going on at the moment. Most developments have both helpful and harmful aspects. But investors generally obsess about one or the other rather than consider both.”

The general investor audience has now become fixated on the already well-known concerns about China, oil and interest rates. And I do mean fixated – with all subsequent news taken in a completely negative connotation.

There is a direct avoidance of this real-life fact: that every development could play a part for both a bullish and bearish scenario.

In times of uncertainty, investors look at the market yearning for validation and for an accurate description of value.

For this, it is critical to understand that the market is far from rational, that it feeds upon fear and greed, and those will never leave the equation.

So, in times where everything seems to be bad (or good), it is more important to keep our eyes glued to hard data and intrinsic value estimates, instead of prices.

In the real world, as has been stated before, things generally fluctuate between “pretty good” and “not so hot.” But in the world of investing, emotional perception often swings from “flawless” to “hopeless.”

I have often referenced it this way here before:

“Things are rarely as good as they feel or as bad as they seem.”

This line pretty much sums up how the market reacts to developments, and how the crowd starts perceiving things as perfect or doomed, mostly swinging between those moods.

As it relates to the major disaster of cheap oil now ‘engulfing’ the planet” as though it is a second coming of the grand extinction, we tend to forget the most basic of items.

If you aren’t an oil company or a net oil-producing country, low oil prices aren’t necessarily a bad thing. For net oil importers like the U.S., Europe, Japan and China, the drop we’ve seen in the price of oil is analogous to a multi-hundred-billion-dollar tax cut, adding to consumers’ disposable income. It can also increase an importer nation’s cost-competitiveness!!!

There was a time this would have been considered great news (like the summer of 2008).

The Goal At Hand?

Time and time again, research has proven that hugging an index ends in average or below average. Not tracking an index result is not a bad thing. Indeed, if permitted to unfold over time, one often finds the circuitous route to be best. In the long run, the investor’s ability to read and interpret data objectively in the investing game is of much value.

A Chart Below for Review:

As covered last week as well, fears are centering in on the issue of sharply lower oil prices have dramatically increased the risk of default for energy-related corporate debt, as shown in the blue line in the first chart below.

Here is what we want to focus upon: a) that should be expected and b) the threat of defaults is concentrated in the energy sector.

Non-energy high-yield debt credit spreads are only 660 bps, much less than half the 1600 bps spreads on energy-related bonds, and less than the spreads on all HY debt at the peak of the PIIGS crisis.

As shown by the red line of the same chart though, swap spreads are very low, in sharp contrast to how they behaved in previous recessions.

Very low swap spreads tell us that financial markets are highly liquid and that systemic risk is very low.

As reviewed several time: this is mostly a problem affecting the oil patch, not everybody. Markets today are far more liquid than they were in 2008 and 2011-12. That is of critical importance, and a source of comfort.

We are getting a retest of the panic lows. Stops are set to be washed out. High cash levels existed for a reason. Yes, I know – now that it is here – more cash is always desired.

Repeatedly over time, long-term investors must recognize that the greatest values materialize during the most difficult time to take action. It is why so few squeeze much out of the market’s actual results.

This is where it is tough. Very tough.

Take that as a direct long-term indication of it’s worth. 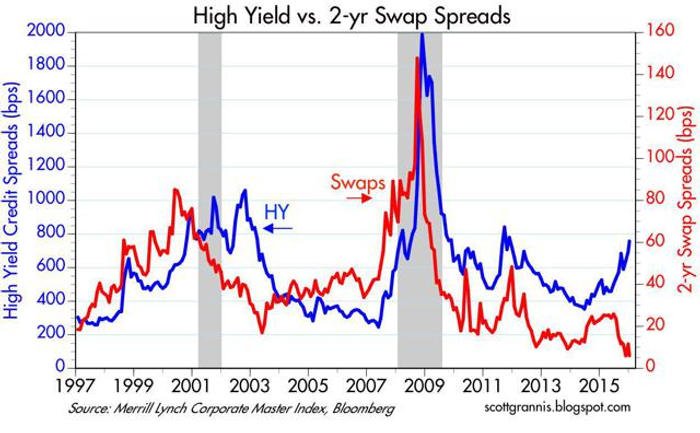 The Cycle of Doom