A week or so ago, in these notes, we suggested the stage had been reached where everyone now hates oil – and indeed we don’t think we ever return to \$100 oil in normal circumstances. That being said, the “picture” is now approaching the too obvious stage.

I have learned a few lessons…one is this: When it really looks this obvious – something is already happening to change it.

The last few days have not been pretty for the dollar. The “experts” started the year telling us about 4 rate hikes this year! We are down to expectations of 2 over the next 2 years.

Both projections are probably wrong. The point?

The things that have caused so much supposed stress in our system may indeed be in the midst of either taking a rest or turning in the other direction for a pause/bounce/shift/change…etc.

Once again, this is happening when the world is sure of the obvious: Oil going to zero and the dollar destroying all other currencies for good. (By the way, in another period – we wished for both – and now we fear them)

Jobs numbers from ADP this morning were solid…so were incomes. The Zika virus did not destroy any country overnight so that’s a plus too.

Commodities of all things, could be turning a bit as the confidence of more rate hikes pauses just a tad – along with the dollar’s rally.

And most important of all – earnings have remained pretty darn good – even if light in the known trouble spots.

The crowd shudders when we hear of a PMI or some industrial number not meeting the “magic 50” number hinting at growth. Sometimes I wonder if, while they fret, they recognize that we may not be getting a real picture of the economy.

Seriously, think about it.

The data reported by various government agencies are structured on equations from decades ago. Does no one consider the fact that the entire world economy has changed from decades ago. The way it works, the way it grows, the rhythms it takes on, the ebbs and flows, the technologies, the processes, the efficiencies, the people, the generations, the tools and the production?

All of it is new.

Apps, smartphones, software, the cloud, supercomputers, mobile, wireless….the list goes on and on. There will be a time I suspect, when we will find that the fears we had were unwarranted because the data was not being completely understood or even reported correctly.

Fear is here. Black Swans have cluttered the horizon so badly, it’s hard to see anything else. The news is bad and more than worrisome. The worst-case scenarios are pitched at every corner – hiding in every crevice.

No one knows the future – ever – and indeed, risk is your only assured comrade while building wealth on a very long journey.

That journey is riddled with garbage, detours and frightening periods.

When I was young – the very worst storm I ever sailed through in the Atlantic lasted for hours. It was so dark, one lost track of time. Treacherous winds and waves blinded any vision beyond 10 feet off the bow. Oddly, we only thought about getting through it. I guess that is what you do when you are in the middle of nowhere and smartphones are years and years away.

The point is this: Sunshine, blue sky and calm waters were beyond every single storm out there – including that worst one.

The US economy is the beacon of the world.

Just a few quarters ago, the Yuan was assuredly going to become king of currencies. That was obvious too. I always tell everyone this when they doubt the future of this great land and the people that built it:

There is no other country on Earth where people will risk their lives to get too…swim across shark-infested waters, paddle on small rafts, climb fences under gunfire…it makes no difference…no other country.

So while we let the crowd fret over the strong dollar and cheap oil fears…just note in the back of your mind, it is getting to that stage of being obvious.

And obvious in the markets is like a virus in oxygen – they rarely survive.

As we watch the likely close to last fretful stages of the chop, the selling, the angst and churn, note a few items:

And to cap it all off, one must not forget that the current picture we see, filled with headlines of fear, stamped by every sentiment survey showing the crowd hates stocks….is the hallmark of every low, every value window, every time opportunity has existed.

The problem at hand?

It feels terrible, it takes patience and it does not end immediately.

It takes time, discipline and the fortitude to focus not on “what’s now” but instead on “what’s next?”

I suspect the next month or so provides a solid place for building value over the long haul. Averaging works and this is what the cash was all about. There is no perfect timing, no perfect day….and it always looks bad. 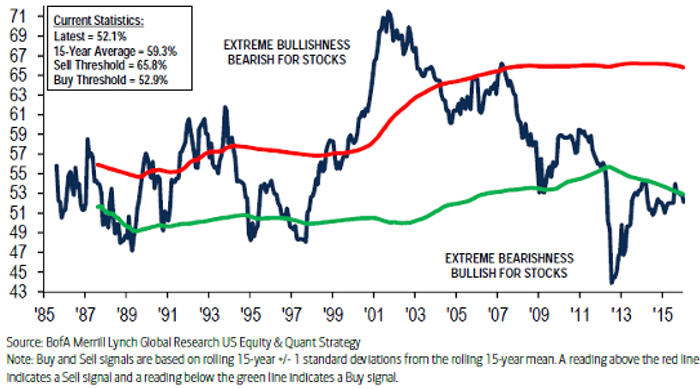 On the heels of the worst month for the U.S. stock market since August, Bank of America Corp.’s contrarian “sell-side indicator” – a measure of Wall Street’s bullishness on stocks – has fallen to 2009 financial-crisis levels.

In other words, Wall Street strategists are feeling especially down on stocks. Indeed, they feel as bad now as they did 9,000 DOW points ago.

“Given the contrarian nature of this indicator, we remain encouraged by Wall Street’s ongoing lack of optimism,” the bank’s strategists write in a note to clients. They add: “We have found that Wall Street’s consensus equity allocation has been a reliable contrary indicator. In other words, it has historically been a bullish signal when Wall Street was extremely bearish, and vice versa.”

The indicator now stands at 52.1, a six-month low and a level that has heralded positive returns over the next 12 months “95% of the time, with median 12-month returns of +24%,” the bank writes.

Now, for the patient investor focused on the proper horizon, that is better than mosquitos any day right?