Quick item: I am working on a longer note that will highlight how bad high speed trading has become and give you a sense of the volatility it has caused. Once you begin to realize what HFT is, you too will agree that it has not at all been an aid to liquidity but instead a way to legally steal money (until the SEC finally figures it out). Once you see it, you will no longer fear it’s mystical reference – but learn to take advantage of it.

As you might guess, my inbox and phone have been lit up by this ugly price action. There seems to be a quickly rising consensus one can take from those calls and emails and it sounds an awful lot like the headlines I read.

It is time to take a breath and think for just a moment as I can sense from the data streams and the selling that far too many are simply doing what always happens in times like these: selling and “feeling better” with the stress gone. I have never been able to understand why the repetitive failure of this approach has not yet become too painful to stop it.

Before I Go Into Detail

I got a great reminder of sanity from our great friend Alan Steel over in Scotland and it highlights a few realities that someone we forget over the long-term nature of markets.

A thought first, I would suggest that the more we know, the worse we get at reacting and managing emotions. In the 80’s and 90’s we had no clue what a Fed board member thought, how they voted, where rates were going and what how some arcane future product betting was somehow measuring what the “Fed statement should say”.

Does it really sound logical? Do we really and truly believe that this is the worst thing we have ever faced? Are we not yet tired of assuming every single thing that goes awry is a Black Swan or something worse than 2008-2009?

I have always said that markets make adults act like kids in a candy store. All the bright colors and themes and attention getters and everyone wants some of everything. They just forget all those emotions when they are facing up at the dentists drilling their root canal because of all the sugar. And then….life moves on.

Now to those great points and a few truths about bear markets in stocks:

I would simply add – the amount of money one makes in successful wealth-building is directly related to how they act – most importantly – in market corrections….not in the periods where it is easy and you just have to watch things go up over time.

I would close this section with a rambling idea:

Think of all the other times we were feeling this way…let that sink in and then think of the levels the market stood at when we were this scared. They were all ugly – and cheap as it turned out. Check the picture – it covers a long time and a lot of problems: 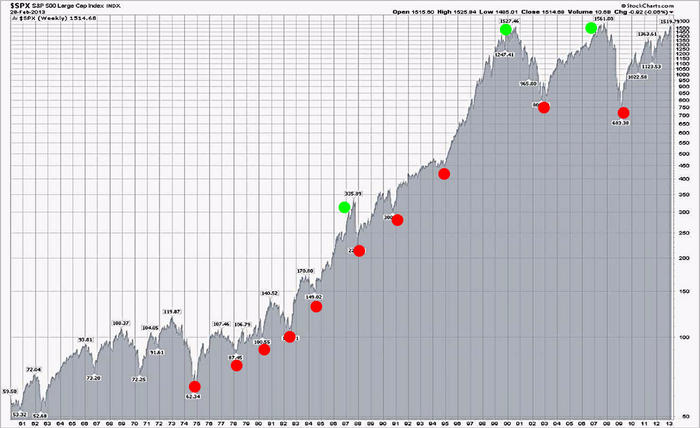 Here is the really sad repetitive part to these constant cycles of emotion:

Recall just a little while back, biotech, emerging markets and FANG were in. A little further back, oil was expensive and “safe”, housing was screwed forever and the PIIGS were going to end the world as we knew it — all while China’s yuan was to become the new global currency. Where is Jimmy Rogers now?

That day will likely coincide with a headline that goes something like this: “DOW Hits New High Amidst Global Worries”

The Law of Large Numbers

First they scare you – they scare everyone. We have been trained to be scared of them. Nutty right?

When something gets big – the percentage multiplier of its growth rate will get smaller. It is not a geometric model.

In the world we have today – with trillions of dollars of credit, assets and GDP flushing back and forth over the landscape, things measuring in the tens or hundreds of billions sound scary, but are tiny percentages in the end.

By the way—here is another view of an even longer period of time – with dozens and dozens of hurdles we have faced, dealt with, gotten over and moved on. Each one of them were terrible, felt bad, caused damage and left scars. There is no way around it – there is only a way through it: 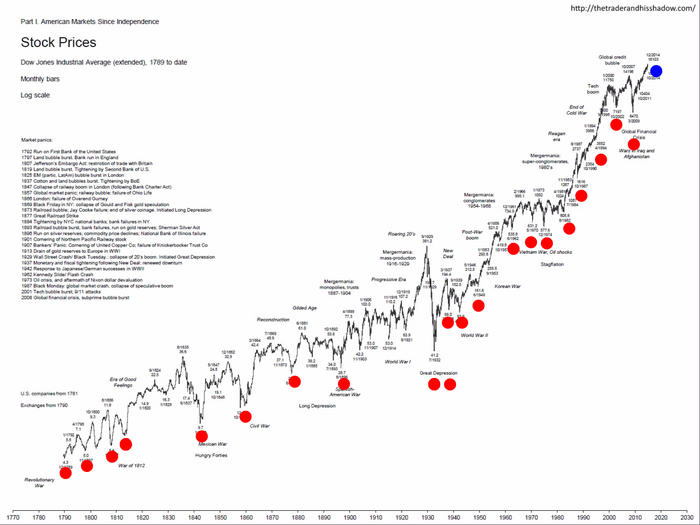 So the chart above goes back 200 years – lots of fears (lots), disasters, bear markets, lost decades, catastrophes, wars, collapses, weather events, mother nature and all sorts of financial shenanigans…including all the crap we are fretting over today.

By the way—the blue dot at the top edge of the graph allows you the perspective of where the markets are today….even as we live through the chop, churn and setbacks.

Keep in mind, the current cycle of fear and doom will end. When it does is precisely when we will look back and realize it was when we felt the worst and feared the most, when it was the toughest to act and when values were the best.

It is a tough, tough game sometimes. It plays on your emotions. Those are when we must stay focused, patient and disciplined – even when it hurts for a bit.