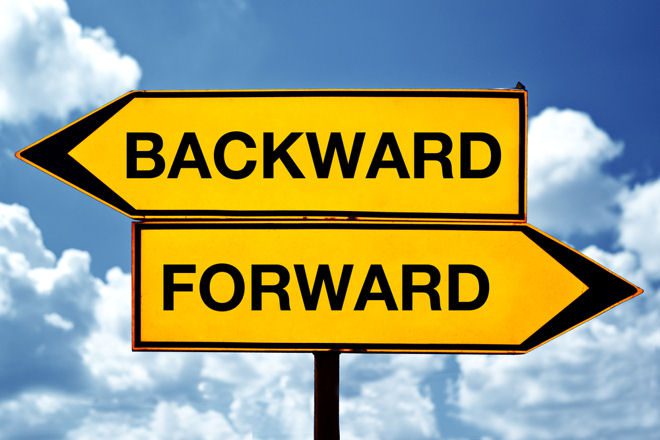 It is a backward world when we shiver over the perspective of a 25-basis point interest rate change.

It is particularly distressing to see this when the market has already done the Fed’s job for it.  Since the latest chatter hit peak levels, the Treasury market has already moved up roughly 35 basis points.  Interest hikes are priced in.

The bears want us all to fret over the idea that the Fed can’t normalize rates without complete global collapse.  It reminds of of the time when the bears were sure that the oil embargo was going to cripple the world – back in the 70’s.

This of course was not correct – and the current waves of fear will also prove to be wrong.

Choppy yes.  Corrective action, sure.  But time and time again I have stated here that we tend to collectively think exactly wrong when we see red ink.  We think fearful events are coming.

Let’s be clear – the ONLY reason you need to fret over corrective waves is that you need the money that is currently in the marketplace – and you need it now (defined as a short term goal).

The feeling of “time” is what drives your brain to react in the manner it does.

If you “needed” that same money for college costs 11 years from now – would you still fret today?  Tommorow?  Next month?  No.

The bottom line here is this – the emotional reactions which are most damaging to investors can be nearly eliminated by proper planning and better portfolio perspective.

A Blip on The Chart

Pull out a long-term chart of the stock market.  Pick one that covers several decades of time.  Here is that you will notice:

The Great Depression is a tiny blip on the chart – almost unreadable.  When it was unfolding, it felt like the end of the world.

The Crash on October 19, 1987 is an even smaller blip on the chart.   When it was unfolding, it felt like the end of the world.

The recession of the mid-70’s, a now massive low and incredible investing point is a blip on the chart.  When it was unfolding, it felt like the end of the world.

The recession of the early 90’s is now also a tiny blip on the chart.  When it was unfolding, it felt like the end of the world…while banks and S&L’s were being lost daily.

In time, we will look back at today – all of this fretting and the e conomic catastrophies we supposedly face – and notice one thing:  it is a blip on the chart.

Take that perseptive to the marketplace and what you will slowly realize is that red ink – the more the better – is your friend.

It is to your benefit to get things when they are ugly even though it feels terrible watching it and felling it unfold.

The high speed boys are prepping the market for some volatility.  We have talked this 25 basis points to death.  It is now almost inconsequential.

My hope is that they raise rates and ignore the chants not too.

My next hope is that the high speed freaks have a temper tantrum and sell hard.  IF that unfolds, the ideal time to be watching for cash to be put to work would likely be from about Friday afternoon and into Monday and Tuesday.

While I hope this happens, I am afraid it might not.

My concern is that we don’t get a real correction.  One to five day events like we witnessed in late August are not corrections – far from it.  For us old guys in the biz, we may need to realize that those things have changed too.  Maybe corrections really are two weeks long now.  Maybe they are over in 4 days.

In the end – know this:  the US economy is more than capable of taking interest rates up.  If we spend the next 2 years going up a couple percent, incredibly beneficial things will begin to unfold.

Be confident that the 25 million kids who will leave their parent’s homes over the next 5 to 8 years will still rent a place or buy a home.  Be assured that these predictable events will not be stopped because their house payments will be $150 more each m onth.

I know it sells lots of press to make you afraid that it will – but it won’t.

Our history – our future – all that we know and see is the result of optimism.

We are here because it is human nature to overcome issues.  Indeed over time, we need to realize as investors that it is the very problems we face (and always fear) which create the pathway for our collective progression as each “problem” is solved.

Billions have been created by new businesses solving the crude crisis price spike problem in 2008.

Hundreds of Billions more have been created by technology to create speed and solve the productivity problems of the 80’s and 90’s.

Hundreds of billions more have been created by solving any number of health proble ms that face the humans of the world.

I could go on – but we need to dig deep and realize that too many have the completely wrong perspective of investing.

We need to spin the process around in our mind.  Embrace bad events.  Embrace red ink.  Embrace crowd fears.

Be excited about problems.  Have your plan in place.  Stay focused during corrections.

I close with this thought.

IF we do not get a tamper tantrum and one more dip down as rates start rising, it will be a sign.  If we find that the ONLY corrective action this market could muster was what we witnessed in the last 10 days of August – the real pain of which was over in about 4 days – it is a sign.  If we get merely small setback from here and do not test the most recent lows even once, it is a sign.

It is confirming for us that this market is a raging secular bull market.

It is telling us that the 1982 playbook is our best guide.

It is telling us that economic strength and stability is far better than the crowd is being taught.

It is telling us that the US is slowly but surely regaining its confidence in the future.

Ms. Yellen – just raise the rates already.  Do not cowtow to the high speed freaks who need more adrenaline.  Let rates come up.  The US will be just fine.

In fact, we will be even better if you give us another problem to deal with – raise rates.