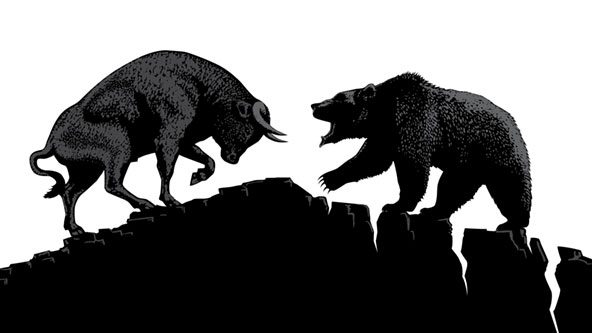 How about a small joke on this summer Friday?

A man walks up to the front porch of a five and dime store.  Sees a young boy sitting in the chair swing out front and a dog laying next to his feet.  The man asks, “Does your dog bite?”

The young boy answers, “No Sir, my dog does not bite.”

The man reaches down to pet the german Shepard and the dog immediately bites his arm.  Surprised and now injured, the man says, “Young man, I thought you said your dog does not bite?”, and the boy answers with a shrug, “that’s not my dog.”

Whistling Past The Rotation

After many months now, the internal churn in the marketplace continues as we do not seem to have yet built the energy to muster a breakout.

While this is what we expect to eventually unfold, the conditions witnessed so far in June are nearly exactly what we suspected in our May notes.

Summer is proceeding as it usually does, not much more fun than watching paint dry.

Indeed, there is much movement – but we classify that as “rotation”.  It is the condition where one or two sectors do well and the others churn in place or do poorly.

In the short-term, it is more the luck of the draw as the back-end of these churning processes tend to see significant reversals.

In essence, often whatever “does well” in the rotation/trade range period tends to then underperform or go backwards after the trade range is left behind.

Such is the game – again in the short-term perspective.

In the Larger Picture

From the broader perspective, we have many supportive elements building under the market’s foundation as the summer persists in wearing out the emotional sentiment of the crowd.

The “strong dollar” fear has dissipated

Soon they will start buying their first homes

Greece is, well, Greece….and not nearly worth al l the ink and emotion spilled over it

So That All Adds Up Too?

Waiting it all out.

Whistling or humming a tune while we watch paint dry.  It is easy to get caught up in all the angst caused by trade ranges.  After all, given where we have all been in recent years, seeing a market just stop going up for months on end makes one “question the recovery”.

As a side note, I always chuckle when I hear some talking head say, “with this trade range going on for months now, one has to question the recovery’s strength……”

I chuckle because they never believed the recovery – even before the trade range started.

But hey, that shows you how boring I am if that causes me to chuckle.  LOL

Back at the Ranch

I noted above that outflows continue to show the massive trepidation felt about stocks in the overall crowd psyche.

In the past two months, the price on the U.S. 10-year Treasury sank—driving the yield 25 percent higher.  Indeed, last week, total bond funds saw nearly $4.1 billion in outflows—on top of a $2.9 billion exodus the prior week, according to the tracking group Investment Company Institute (ICI).

But…and it is a big “but”, since the beginning of the year, investors put $42.7 billion into bond funds, after adding $43.5 billion last year.

On the stock side of the scale, which is the side we should be focused upon as bonds ready for the day of pain, retail investors continue to follow their “feelings”.

According to the same ICI data, investors drove net stock fund outflows for all of 2014 to a sizable $60.2 billion!

More important – even as stocks have meandered nearly in place, already this year (thru mid-June), the crowd has driven another surge in outflows from equity funds of $45.5 billion more this year.

That is a bit deceptive as the data nets the difference in flows, offsetting inflows into international funds.  In reality the exodus from US stock funds alone last year was closer to $90 billion and another $65+ billion this year already.

That’s how you track the “footprints of fear.”

Scared investors run from what they fear and pile into what they remember most recently.  All they know about bonds is that for as long as they can remember rates went down.

They don’t recall 1982 – or any time in the 80’s for that matter.  They do not recall we lived through much worse.

Staggering flows into bonds (still) and equally staggering flows out of US equities have historically pointed to only one thing:  a crowd that is deeply scarred by fear.

The Tough Part of The Deal

Keep this in mind:

Those sobering ICI figures come against a backdrop of stocks trading around new highs.  The retail investor crowd was burned by two bear markets within an eight-year period.

One can see in the flow figures that they continue to read the media and feel the pain – and in my humble opinion, will run from stocks at the drop of a hat – for many years and thousands of points to come.

Surprisingly, these latest data come from a period where stocks did not go down!  They merely stopped going up for the “Great Pause”

Get me another cold one and pinch me when I get nervous (we all do).

This paint drying process is already old – and it’s only June : )

Relax…and let it come to us.

The crowd is already leaving.

Happy Friday and Have a Great Weekend!